Menu
You did not add any gift products to the cart. Check your available gifts! 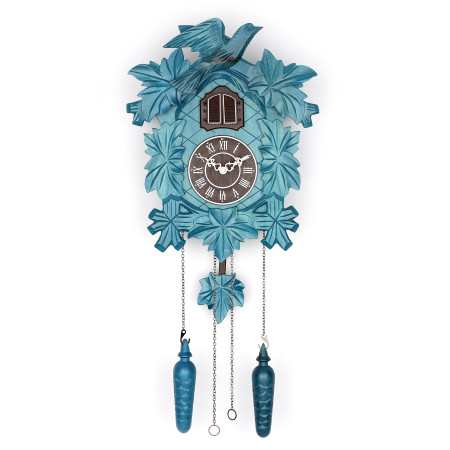 Be the first to review this product

The first cuckoo clock was developed by watchmakers in Germany’s Black Forest region in the 18th century. The mechanism of the watches was made using suspended weights, and their accuracy was ensured using a pendulum. The body of the watches was made of wood and resembled a small rural house. The watches' unusual design proved very popular, and the cuckoo clock has endured for over 300 years.
Modern cuckoo clocks improve on the traditional design by including a quartz mechanism, which is battery-operated. In modern cuckoo clocks, the sound can be regulated and even turned off completely, making the design more practical.

DESCRIPTION:
THE CUCKOO: The bird appears each hour, flaps its wings and sings. As the cuckoo sings, you can hear the sound of the forest in the background. The number of cuckoo calls indicates the coming hour.
NIGHT MODE: The clock has a built-in light sensor. It located above the XII mark on the clock’s dial. The night mode is activated automatically. When it gets dark in the room, the clock stops chiming.
VOLUME CONTROL: You can adjust the sound volume with the switch on the side panel. If you get tired of the cuckoo, you can turn it off.
MOVEMENT: The clock uses a modern quartz movement to provide a good timekeeping.
BATTERIES: Two D batteries are required. The batteries are not included.

We own the brand TIMEGEAR producing wall and interior clocks. Currently, it offers two types of products:

German watchmakers created the first cuckoo clock in the XVIII century. The watch case was made of solid wood and decorated with hand-carved adornments. The clock movement was powered by the energy of small weights suspended on chains.

The shape of the clock resembles a farmhouse or a hunting lodge surrounded by birds, animals, and trees. The cuckoo lives in a small window under the roof. It shows up to signify the current time at the beginning of each hour.

The mantel clock history dates back to the XVI century. When mantel clocks became rather interior decorations than timekeeping tools by the beginning of the XIX century, they acquired their usual form. The clock movement improved continuously. In addition to standard clock chimes, some mantel clocks started to play musical melodies.

We have combined a classic design and modern technology in TIMEGEAR clocks. Traditionally, the clock case is made of wood. In contrast to outdated movements that require everyday winding, TIMEGEAR clocks use modern quartz movements. They are battery-powered and provide high accuracy.

All TIMEGEAR cuckoo clocks have Night Mode allowing turning off the cuckoo so that it does not disturb your sleep.

TIMEGEAR interior clocks feature a traditional design with decorations carved from solid wood. Some models are able to play different tunes depending on the hour.

The sound volume is adjustable. If you want to stay in silence, you can turn off the sound completely.

Only registered users can write reviews. Please, log in or register